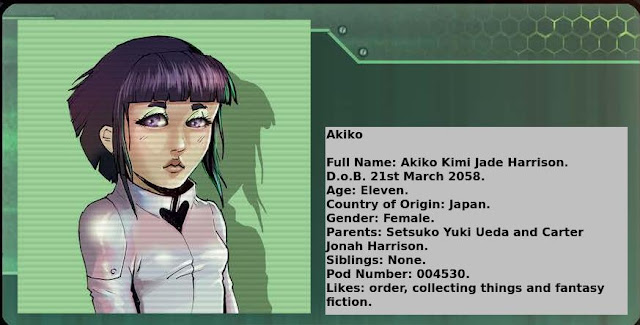 Akiko Harrison was in her bedroom, playing with her fairy dolls and trying not to listen to her parents arguing. This had become more common of late, interspersed with long periods of silence and chilly conversation around the breakfast table. Akiko tried to see the lighter side, as her dad switched to his native American English when he grew angry, her mum replying in Japanese. Akiko understood both, so it wasn’t really that funny.

It had all started in the summer. Normally they went to the States during the school holidays, but this year they didn’t go. It seemed her grandmother had died of old age, and her grandfather of a broken heart a few months later. Akiko wondered how a heart could break, as it was made of flesh. She was going to ask her mother, but decided not to until the shouting stopped.

Akiko’s parents had always been strict. They wanted her to do well in life, and be everything she could. This meant homework inspections and extra activities every evening, searching questions about her day’s lessons, and early bedtimes. Since the summer, they’d been less strict, but also more distant. The homework inspections were brief, the extra lessons almost non-existent, and now Akiko spent a lot of time alone in her bedroom. If she could keep the bedroom time and get rid of the arguments, she’d be fine, as before she had very little time to play.

She’d decided she wanted to be a writer when she grew up, and write stories about fairies and magic and other stuff. This wasn’t good enough for her parents of course, she had to choose a worthy career. So she told them she wanted to be a vet. This wasn’t as worthy as being a doctor, apparently, but was acceptable as long as she was a very good one. Of course, both her parents were doctors, her mother a heart surgeon, her father a transplant specialist. This meant they worked long hours, but they tried to make sure at least one of them was home at an early enough time to put her to bed. Lately, that hadn’t been working out too well, and the child-minder Mrs Kimura had been performing the duty.

The next evening, after Akiko had been ushered into bed and given a kiss that was more noise than contact, the house fell strangely quiet. She could hear the television downstairs, but very little else. No arguing for a change, no slamming doors, no American English or warnings about waking ‘your daughter’.

And in the morning, the atmosphere around the table was noticeably less cool, neither parent becoming angry because the toast was cold or there was butter in the jam. Unfortunately, the homework inspections and extra work returned. Although it took on a decided slant towards space based sciences. She began to realise what was going on when her mother asked her to build a house on another planet out of Lego. Everywhere she looked there were rockets and shuttles and flying saucers, and everyone was talking about the spaceship they were building on the moon or somewhere up there.

From then on, things began to move with almost military precision. All meals were timed, all school and work times logged, homework was allocated a time slot, and once finished the focus was turned to getting selected for the space program. At no time did her parents ask if she wanted to go, it was just decided she was. Not only that, but she had to convince the selection committee she was worthy of being chosen, despite her young age. Which is why she was getting extra lessons in astronomy and related subjects. Akiko was pretty certain she would only be a passenger, and wouldn’t be expected to fly the ship or anything, but her parents insisted. And with the continued absence of the arguing, she went along with it.

One evening, to her surprise, she was called away from her homework to watch the television, something unheard of before. She sat down in a chair and looked at the screen. It was showing a news item. The first planet outside our solar system, she learned, had been discovered before she was born. Since then, many more had been found, some of them Earth-like. And now, one of those, the nearest to our own planet they could find, had been chosen as the destination for the colony ship. Akiko almost snorted when she heard it being called, with mind-numbing inevitability, New Earth.
“That,” her dad said proudly, “is our new home.”
“We’re going there?” she asked, unaware a decision had been made by her parents and the selection committee.
“Yes, we’ll be leaving very soon,” her mother added. “The selection committee were very impressed with our work.”

Akiko returned to her homework feeling a little stunned. It seemed the decision was made, the selection committee impressed without her input. She sat at the table for some time, staring at her history homework. It all seemed pointless now. Not just history, which was Earth history and so now irrelevant, but the homework itself. What was the point of getting top marks and impressing her teacher if she’d be leaving soon and never see her again? She was filled with a deep dread when she realised that the people on a new planet wouldn’t need a writer, and so that was also taken from her. Tears ran down her face and splashed on to the open book. Neither of her parents noticed.

From then on her mantra became “what for?” When she was asked to do her homework, or extra studies, or behave, it was the same answer. She was punished by being sent to her room, which was the best reward she could have received. She played with her toys more, made up long stories about her fairy dolls, built castles from her Lego and generally played like she’d never played before. Ironically, she was the happiest she’d ever been. But the deadline drew closer very rapidly, and soon the day would come when they boarded a shuttle to be taken to the colony ship.

She was told she could only take a few items, but would be asleep for most of the journey anyway. She would be able to continue her studies within the Dreamtime. Akiko wasn’t surprised to be hearing all this at such short notice.

Now the time had come. There was a long train ride to the shuttle launch site, a hurried inspection of their documents, and then a long climb up to the passenger compartment inside the shuttle. There followed a terrifying ride up into space, a long and tedious docking procedure, and then she was aboard the ship. The ship was far bigger than she’d been expecting, dwarfing the shuttle. And there was no weightlessness, although the gravity felt a bit strange, like it was going up and down.

A crew member dressed in a light green uniform led her to a pod, one of dozens lined up in a large room. Her parents were led in a different direction, disappearing with the briefest of waves. She was told to lie down and the woman connected various pipes to her. Another unwanted surprise. Then the Dreamtime cap went over her head, the glass lid closed and she was sealed inside. The small light glowed a dim white, which faded slowly, and she was in the Dreamtime.

A floating face appeared, greeting her by name and giving her instructions on using the Dreamtime interface. She was soon in the main menu, and saw a list of games she could play, one of which was a fantasy game. She was disappointed to learn she would have to earn time in the game by doing other activities and school work, with no one but the cold and logical  computers looking over her.
No change there.
Newer Post Older Post Home