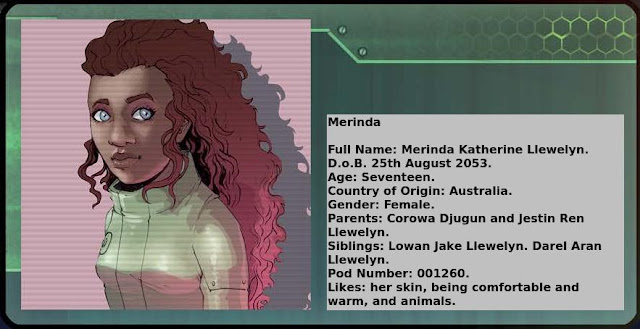 Although Merinda Llewelyn was interested in the idea of people going to another planet, she was really starting to get annoyed with them constantly talking about it. Her lessons in school were centred around the mission, her friends and family talked about it, every programme on every type of media managed to work in a reference to it, even the most unrelated. Just last night her parents had been watching a cookery programme, where they made a cake in the shape of a rocket. It really was getting to be too much, she would really be glad when the ship finally left.

Despite her efforts, one aspect of the mission did catch her interest. She saw an article about the Dreamtime and started to read it. As her mother was an Indigenous Australian, she was immediately drawn to it. As it turned out, this Dreamtime was almost completely unrelated to the belief system of her type of Dreamtime. Nevertheless, she became fascinated by it. At that time it was merely a theory, that the human brain could be stimulated by external electrodes to create a similar effect to VR goggles. This effect could also be extended to the electrodes reading brainwaves, and thus creating a control system based entirely on human thoughts. In other words, a human could see images, hear sounds, and interact with a virtual environment with no more than a skull cap and the associated software.

Merinda followed the development of the Dreamtime technology, even got the chance to try it during a school trip. It was strange at first, but she understood why it was called Dreamtime. She saw images in her head like dreams, but she could control these by thinking in a certain way. It was crude, and very simple, but it worked, and was getting better all the time.

One friday evening, Merinda and her parents sat together to watch television, as they did most fridays. They voted on what to watch, it usually being an animated comedy or child friendly action film. This evening they were watching a documentary for a change, about a man who’d been kept asleep for five years in a specially designed pod. This was a very important achievement, as without this technology, the space mission was impossible. Scientists had tried several techniques to keep humans alive for hundreds of years. In the end, they’d used the Dreamtime to regulate his body and mind. The programme went into some detail, much of which Merinda didn’t understand. But basically, the brain was slowed down, the body followed, and therefore needed only minimal nutrition and oxygen. The Dreamtime also provided the sleeper with something to do to pass the time and keep the mind healthy, and as a result also kept the body healthy. The programme showed the man twitching in his sleep, like their dog did sometimes when it slept in front of the fire.

Later, she was thinking about what kind of dreams she would have if she ever went into the Dreamtime. It would involve animals, lots of them and of all different kinds. She’d fly with eagles, swim with dolphins, run with gazelles. She’d float serenely with huge whales, and explore the world as a tiny ant. When she saw what was actually available, she was glad she wasn’t going. Although a lot of children would be on the spaceship, the options available were typically adult. Walk around a museum, cycle along a canal, hike through a forest. That was more of a nightmare in her opinion.

The next day in school, her class were given the inevitable task of writing an essay on the theme of space travel, for the hundredth time. She groaned as she listened to the teacher, and for a while couldn’t decide what to write about. In the end she wrote down her thoughts from the night before, about the Dreamtime and what she’d want to dream about. Merinda handed in the assignment with some relief, and then forgot about it. There were far more interesting things to think about than space travel, in her opinion.

A couple of months later, her teacher announced she had secretly entered some of the pupils’ work into a national competition, and one of those essays had won a prize. Merinda was called to the front of the class and given a certificate and a gift voucher, for her essay about the Dreamtime. She gracefully accepted the prize, began planning what to spend the voucher on, and tried to forget about the whole thing.
As it turned out, her teacher had inadvertently set in motion a series of events, which would ultimately lead to one of the Dreamtime committee reading her essay. It was then passed around the committee members, and the scientists and technicians working on it. The end result was the Dreamtime being re-designed, with different versions for different age groups, and a much wider choice of activities. This led to the selection committee sending her family an invitation to apply for a place on the colony ship, which came as quite a shock to all of them.

The following friday evening, the three of them sat down to discuss what they would do. Merinda wasn’t surprised to discover both her parents wanted to apply, they’d both become space geeks over the last few years, following every step of the mission plan. Merinda wasn’t at all sure.
“This is a massive decision,” her dad said, “so we should take time to think about it.”
“And we won’t do anything unless we all agree,” mum added.
“Personally, I’d like to at least apply, and take it from there,” dad said.
Her mum smiled “And I want to go, no hesitation or regrets.”
Merinda didn’t want to let her parents down, and was fairly sure they wouldn’t be chosen anyway. Her dad was a gas engineer, and her mum was a planning officer, not exactly useful skills in space.
“Ok, let’s apply, see what happens,” she said.

The rest of the evening was spent filling in the forms. Some of the questions were a bit random, but in the end they were completed and sent.
Time went by, and Merinda tried to forget about the application. Everywhere she looked there were reminders, but as the weeks turned to months she began to relax more. There were more essays to write, more space-related field trips, more adverts in the media with a space theme. She spent more time in her room, where she could at least limit the amount of the stuff she was exposed to.

And then the family were told they’d been successful in their application, and would now need to report for physical and mental examination. During this process, she would be interviewed without her parents being present, to give her honest opinion about her thoughts on travelling to another planet. Her parents spoke to her about this part. They were overly casual, as both of them wanted to go and didn’t want her to ruin it for them, but were also aware of dragging her to an alien planet against her wishes.
Now she was torn. She wanted her parents to be happy, but she also wanted some happiness for herself. If she was the cause of them being rejected, she would feel terrible, and it might even break the close bond they had. All she could do was try to convince the interviewer she wanted to go, and if it didn’t work she would have to face the consequences.

On the day of the examinations she was very nervous. It was made worse by the fact the physical tests came first, and only at the end of the day did she find herself sitting alone in a small office with three of the selection committee and a chaperone.
The woman in the centre spoke, confirming her name and a few other details. Then she came right out and asked, “Do you want to go to another planet and start a colony, and never come back to Earth?”
“Yes,” Merinda managed to say, only a little hesitantly.
“Why?”

And there it was, three letters that would make the difference between going and staying, between making her parents happy and possibly losing the closeness she had with them. She took a breath to answer, and discovered she’d not managed to filter out as much of the constant media coverage as she thought.
“I want to be one of the first humans to see alien creatures,” Merinda smiled, because she knew it to be true.