Yuri and the Rockets 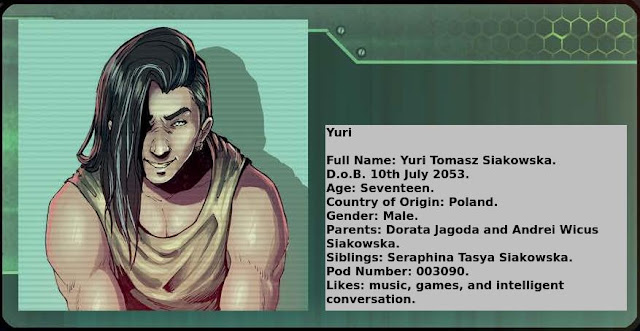 From the classroom in which Yuri Siakowska sat, he could see the bright flame of the rockets as they transported material into orbit. Somewhere above Europe, possibly even directly above his head, dozens of nations and companies were building a space ship. It was a huge thing, designed to carry over five thousand people to a new life on a recently discovered planet. They would have to travel for hundreds of years, and take everything they would need to live with them.

For Yuri it was just a distraction. He was working towards his final school exams, and could do without everyone talking about it, the daily launches, the media circus, and most of all, the diversion of resources away from other things. The keyboard he was practising his scales on really needed replacing, but the school didn’t have the funds. The IT department had brand new computers, the science department was so full of new equipment there was barely room for the students. Even the after-school astronomy club, for so long the butt of many jokes, now had a new telescope and more members than it could cope with. And he couldn’t even get a single keyboard.

And there were still two years to go before the thing left, although knowing his luck, they’d just start building another one. With the rocket now out of sight, and the booming roar fading, he returned to his lesson. Scales were boring, so he was trying to get them over with as soon as possible so he could move on to something more interesting.
Later, in the school cafeteria, Yuri was dismayed to find his friends talking about the colony ship’s mission.
“Can we please change the subject, it’s all you ever talk about.”
“We were just saying,” his friend Martin replied, “they might run into aliens out there, and what happens then?”
“I suppose it depends on the aliens.” Roberta answered.
“There are no aliens out there,” Yuri insisted. “If there were, we would have seen them, or heard the radio signals. Or they’d be here, handing out advanced technology or slave collars.”
“Nonsense,” Franco snorted. “Space is quite big you know, two alien species could easily miss each other.”
“So you aren’t applying then?” Roberta asked Yuri.
“To go with the ship? No chance. There’s nothing out there but pain and slow death.”
“I’m applying,” Roberta said.
“Already have,” Franco added.
“And me, the whole family are going,” said Martin.
“Well, good luck and bon voyage,” Yuri raised his glass of juice. “Now, let’s talk about something else.”

When Yuri arrived home he was appalled to not only find his parents and sister talking about it, but they actually had the application forms open on their phones.
“No, not you lot as well.”
“You don’t want to go into space?” his sister Seraphina asked.
“Of course not, there’s nothing out there.”
“Yes, there is. They’ve already found hundreds of other planets, and ten or more are Earth-like.”
His mother put her phone down. “Well, Yuri doesn’t want to go, so we can’t go.”
“What?” Seraphina said loudly. “I’m an adult, I’ll make my own decisions.”

Yuri left the three of them arguing and went to his room, closing the door on the increasing volume. Unlike Seraphina, he wasn’t an adult, and at the end of the day he’d have to accept whatever decision his parents made for him. He pulled his headphones on and selected his, ‘arguing family #3’ playlist.

The next day another launch interrupted his maths class. For this he was actually grateful, as maths was his least favourite subject. He watched the flame rising slowly, then getting faster and faster as it gained altitude. Despite all the recent activity, most of the class stopped to watch, but then most of them had applied to go. Very few, if any, would actually go. The screening process was intense, and involved many tests, interviews and evaluations, most of them deeply invasive in some way. There was also a kind of shopping list of the people they wanted, as the new colony needed to have a variety of personalities, skills sets and genetics.

When he arrived home the next evening, things were a lot calmer, and this time they gathered around the table to eat, and to discuss the situation like adults. At the end of the meal, Yuri had agreed to fill in the application forms, mainly because he expected them to be rejected. What would a colony want with an artist, a songwriter, a backing singer and a student?

Each day that went by, the rockets continued to rise and the application became a distant memory. Unfortunately, three months later, they were asked to report for their first test, a medical. This was where most people were rejected. There was a long list of exclusions, and Yuri was surprised anyone was chosen at all. He was doubly surprised to discover his whole family had passed.

The next tests were for personality and mental stability, and was pretty sure his family, who were always arguing, would fall at this hurdle. But they made it through that as well, as apparently family’s arguing was normal. Yuri had a sinking feeling as he realised it was all going too well. He was somewhat relieved to find they’d made the reserve list, and were therefore unlikely to be chosen. Well, he’d done his best, the rest of the family couldn’t deny that, but bad luck, maybe next time.

So he went back to concentrating on his school work, trying to ignore the rockets, and the chatter about those who’d made the list, the conspiracy theorists and sour grapes of those who hadn’t. And slowly, steadily, day after day, he began to watch the rockets. The watching became a longing, almost as if not being able to go made him want it more. Each time that orange flame rose into the clouds his need to be aboard grew.

The time came for the people who were going to prepare. Everyone, even those on the reserve list, was told to be ready. The assets of those people were signed over to the government, to be sold to help pay for the project. If they didn’t make the flight, those items would simply return to their ownership. Each adult passenger was allowed five kgs of baggage, each child only three. Yuri was disgusted to see just how little that was, but nowhere near as upset as his sister, who wanted to take all her shoes.

Departure day was declared a national holiday, so people could say goodbye. Security was tight, with local police and army ringing the shuttle take off pads. There had been several incidents, and now Yuri realised what a good plan it was to build the ship in orbit and not on the ground. The day crawled by slowly for Yuri, he just wanted it over with now. Every radio, television and internet broadcasting channel was focused on just that one thing.

Late in the afternoon, after more launches, there came a heavy knocking at the door. Yuri’s heart rate went sky high, and he heard his mother and sister squealing. Yuri’s emotions were running wild. He’d accepted they wouldn’t be going, but secretly hoped they were. Someone answered the door, and there was a brief conversation. A few seconds later his father shouted.
“We’re on, let’s go. Quick!”
Yuri grabbed his bag and ran down the stairs, still expecting to find his dad laughing at his practical joke. But no, a very serious looking man stood at the door, and several blue lights were flashing out on the street. The four of them were ushered into the back of a car and off they went.

As it turned out, those people with a creative personality were under-represented on board, and that one family had changed their minds at the last minute. Yuri and his family were the closest alternative to the launch site, and therefore the only other option. And now, he was strapped into a seat in the last shuttle, the acceleration pushing him down as the orange flame propelled towards an unknown future.

Later, when he looked back, he remembered his very last thought on Earth.
No such thing as aliens.
Newer Post Older Post Home