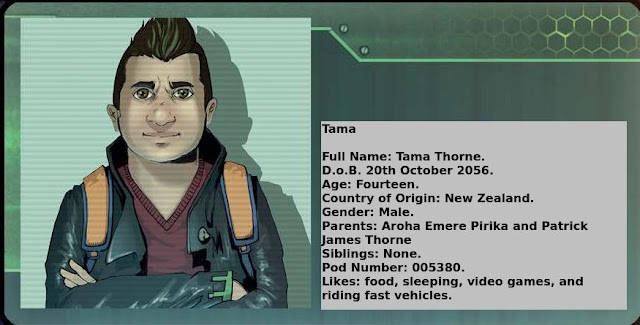 A shout of fear and pain interrupted his thoughts as he wandered home from school. Turning the next corner, he saw a group of teenagers surrounding a young boy of about ten. The ringleader of the small gang was trying to take the backpack from the boy, no doubt to empty it onto the floor. The rest of the gang stood back, laughing but taking no part in the attack. The boy, although clearly scared, was resisting as best he could.
The gang were all wearing blue school uniforms, just like his. “Sure you got enough backup, Braggs? or shall I go and get a few more cowards for you.”
Braggs spun around, his angry gaze faltering when he saw who had spoken.
“Keep out of this Thorne, it's not your business!”
“I'm making it my business, if you want to fight someone, have a go at me.”
Braggs was hesitant, but he couldn't back down in front of his gang. “Come on, let's teach him a lesson for being on our turf.” He walked towards Thorne, his five gang members trailing uncertainly behind.

Thorne stood his ground, but his mind was watching, planning, deciding on possible actions. Braggs was as tall as Thorne but not as wide. He relied on his gang to support him, but only picked on smaller kids anyway. Thorne smiled as the boy they'd been bullying took his chances and quickly disappeared, backpack intact. When he was a few steps away, Braggs stopped, his gang dutifully spread out behind him like sheep.
“What're you doing here? it's Whites only on our patch.”
Ignoring the comment about his Maori origins, Thorne laughed. “Your patch? What are you, some kind of criminal gang leader?”
“Don't laugh at me! I'll wipe that grin off your stupid black face!”
“Now's your chance.” He held his hands out to his sides, indicating he was ready.
As Braggs began to move hesitantly towards him, Thorne spoke quickly.
“Don't expect this lot to back you up.”
“They'll do as I say.”
“Really?” Thorne counted them off, pointing at them individually. “He'll just run. He won't do a thing except shout. His grandmother is from Ghana, so that's him out. He punches like a kitten, and I think this one has already wet his pants. So that's just you left, the biggest coward of them all.”

His face now filled with anger, Braggs stepped forwards and swung a punch at Thorne, who took the blow on his stomach with no visible reaction. Braggs swung his left arm next, flailing around like most people who haven't learned to fight. Thorne moved into a boxer's stance and jabbed Braggs in the eye before his own blow could land. It wasn't a hard punch, but Braggs went down screaming. At this point the teenager at the back ran, another started shouting about revenge but didn't do anything. The one with the Ghanaian grandmother shook his head, nodded at Thorne, and calmly walked away.
He watched while the two remaining boys helped Braggs to his face and led him away, clutching his eye and making threats, promises and racist comments. It was almost funny, the way these bullies reacted to his light brown skin. It had been happening as long as he could remember. So he'd learned to talk his way out of trouble, and when that didn't work he learned to fight. Not just how to box, but how to read his opponents. Shaking his head, Thorne turned his thoughts back to his favourite subject, video games, particularly games which involved planning and tactics, and aliens of course. He really loved space games.

The next afternoon, Thorne was called to the headmaster's office, and was surprised to see his parents sitting there. They looked worried.
“Mum, dad, what's happened?”
The headmaster, Mr Pearson, spoke first. “Sit down Tama, and I'll explain.”
The room fell silent as Tama sat next to his mother, she glanced at him, smiling slightly, then turned away. Mr Pearson shuffled some papers, clicked his computer mouse a few times, and then turned to look at Tama. “We've had a complaint, from the parents of Philip Bragg, claiming you attacked him yesterday, giving him a black eye.”
“What? He punched me first, he was bullying a little kid and I stopped him.”
“That's not what Philip is saying. He says he was on his way home when you walked up to him and hit him for no reason. Two other boys have confirmed his story.”
“Well two other boys are lying.” Thorne's voice was rising with anger. “Ask the others, and the kid they were picking on.”
“Tama, please, calm down. We're just trying to discover what happened.”
“I don't see how it's any of your business anyway, we weren't in school.”
“Tama!” his father hissed.
Mr Pearson spoke calmly. “You were wearing your uniform and on the way home from school, as were the other boys, and so it is our concern. Now, do you know the name of the other boy, the one you claim they were picking on?”
“No,” Tama mumbled.
“What about the others you mentioned, do you know their names, or at least their faces?”
“Probably know them if I saw them, but they'd only lie about what happened anyway.”
Mr Pearson studied Tama for a few seconds. “You see the problem we have here. Those three boys say you hit Philip in the face, giving him a black eye. But there’s only one of you, and only your word they’re lying.”
“Braggs and his gang were picking on a kid, and I stopped them. There were six of them and one of me, and they said I couldn't go into their patch because I wasn't White.”
All the adults in the room reacted to that.
“He said that?” His dad was clearly shocked.
“Really?” His mum grabbed his arm.
“Well,” Mr Pearson said, maintaining a professional calm, “that's not acceptable at all. If that's true, I'll be having a serious word with Philip, and his parents. Now, Tama, I need to look into this further, compile a report and then decide on any actions that need to be taken to prevent further occurrences. I'll call you as soon as we've finished.”
Tama started to speak, but his mother squeezed his arm, and spoke herself. “Thank you Mr Pearson.”

They walked in silence back to the car, then drove home. There was an atmosphere in the house, but Tama had the strange feeling it wasn't just an angry silence. Lot's of meaningful glances passed between his parents, but still they didn't speak. Finally, with the dinner on the table and the three gathered around, his mother spoke.
“Tama, look at this.” Instead of questioning Tama about the incident with Braggs, she handed over her tablet. On the screen was a graphic of small people moving around in green fields, a row of brightly lit domes on one side. Underneath the picture was a flashing banner which read.
“Applications now open!”
Tama looked at it, confused as to what his reaction should be. “What's this?”
“That,” his dad answered, “is a colony space ship, taking people to a new life on a new planet.”
“And...” Tama suddenly realised what they meant. “You want us to go?” he gasped.
“Yes, we've been thinking about it since we heard it was happening.” Mum said.
“And, you know, there's just the three of us since Gran died. We can all go together, start a new life. Won't that be exciting?”
Tama sighed. “It's because of me isn't it? Because of today, and last week, and all the other times.”
His parents were silent a moment, then his mother put her hand on his arm. “Yes, it is. But not in the way you think. We believe you, you know, about today? You were helping someone who was being bullied, and you should be rewarded for that, not punished. We want to go somewhere that happens, where there are no bullies and no racists.”
Tama smiled. “Ok!”
“Well that was easy,” his dad laughed.
“Easier than I thought,” mum agreed.
“When do we leave?” Tama asked.
“It's not that simple, we have to apply first.”
“Oh, so we might not get picked?” Tama's smile faded.
“I think we have a good chance. As this is the first one, they're trying to get as much genetic diversity as they can. So most of those chosen will be mixed race.”
Tama's smile returned, “can I take my games?”
They both laughed, “Yes, as long as they’re digital copies. You’ll be in a kind of sleep most of the time, but you’ll still be able to play.”
Tama grinned. “Cool, gaming and sleep, two of my favourite things!”
Newer Post Older Post Home