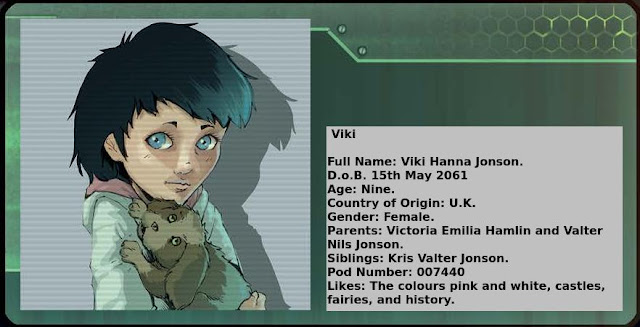 Viki was bored, again. She was sitting on a table in the creche, swinging her legs and thinking she was six now, and didn’t need to be in a creche like a baby. Her parents, as usual, were working late on the very important project. They didn’t tell her what the project was, just that it was very important and would help a lot of people. Eventually, one of them would arrive, smiling and apologising and pretending everything was fine. And they always fetched Kris first, every time, as if his being bored was more important than hers. Kris was in a different class to her, and went to a different creche, because, her parents said, they were twins, and needed to develop their own identities. Even though he was annoying she wished he was here now. At least she would have someone to talk to, to tease and get into trouble with.

Her parents finally turned up, with Kris of course, but they still didn’t get home until almost seven, and that was bed time. But this evening, something was different. Her parents had been quiet but kept looking at each other, and smiling. They were up to something, but Viki couldn’t work out what. In the house, instead of sending them upstairs, dad told them to sit down in the front room. With wide smiles on their faces, her parents produced two large boxes, one for Kris and one for her.
“You can open them now,” mum said, “but remember it’s past your bedtimes.”
Viki opened her box eagerly, and inside found a toy dog, about as large as a real puppy. It was brown with white paws and a white face. It’s eyes were glowing a soft green. Viki was slightly disappointed, she had all kinds of teddy bears and soft toys, and didn’t really need another one. And then it spoke.
“Hello Viki, I am Dog-Knows, would you like to show me your bedroom?”
“It knows my name!” Viki gasped.
“Yes, I know many things, and I can learn all about you and what you like.”
“Wow! Thanks mum, dad.”
“Do you like it? it can do loads of things, play games, answer questions, and it’s eyes change colour,” her mum replied.

Kris had a similar toy, but his was black and white. It was also called Dog-Knows. She would have to think of another name to call her own. As she walked up the stairs, Dog-Knows held to her chest, she went through some names of the people she knew, but didn’t really like any of them.

Once in bed, she began to find out more about Dog-Knows and what it could do. The first thing she found out was that it more or less did as it was told, and the second thing she found was the child-lock, which annoyed her a great deal. The toy’s eyes could be made to shine almost any colour, and could be used as torches for reading when she was supposed to be asleep. When eight o’clock arrived, Dog-Knows announced it was time to sleep, and it’s eyes dimmed to a soft glow. Enough for comfort in the dark, not enough to read by. No matter what she said, the toy wouldn’t brighten them again, but did offer to sing her a lullaby.

In the morning, she was awakened by Dog-Knows softly vibrating and brightening his eyes. She had to agree, that was better than Kris running in and jumping on her bed screaming. At the breakfast table, she discovered Kris had named his Dog-Knows ‘Wolfie’ which she laughed at and was told off by her dad. Wolfie was a stupid name, in her opinion, but she kept this to herself. She wasn’t allowed to take the toy into school, but was told she could have it in the creche afterwards. Throughout the day, she tried out different names for the toy, going through her classmates, relatives, neighbours, and family friends, but couldn’t find anything she liked.

Later, in the creche, she found a quiet corner and talked to Dog-Knows, and found he was good fun to play with, and knew lots of games. She asked him what she should change his name to, but he said the choice was hers. Other children came over and asked her if they could play with Dog-Knows. The answer was always no, whatever reaction she got, whether they cried or screamed, and even when the teacher came over and asked why she wouldn’t share. She wouldn’t even let them listen when he told her a story. This was her toy, and hers alone.

The other children were collected one by one, until, as usual, she was the only one there. The teacher sat at a table at the other end of the creche, doing something with her phone. This time Viki didn’t mind because she had Dog-Knows. He told her stories and jokes, and answered her questions as best he could. He told her how he worked, and all the things he had, like a tracker so Viki would never get lost, an alarm if she got into trouble, access to the internet, and of course the very useful glowing eyes. He also explained that because Viki was young, her parents had told him not to say or do certain things, to wake her in the morning, and get her to sleep at night. This part particularly annoyed her, and she began pushing at the toy’s boundaries. Each time she reached a limit, the toy patiently explained why he couldn’t comply with her wishes, never getting angry or bored with repeating himself. Over the next few days, Viki and the toy got to know each other better, but she still hadn’t settled on a name.

The two soon formed a close bond, spending every possible second together. Sometimes, she and Kris would sit together with Dog-Knows, as he was still called, and Wolfie. The two toys were absolutely neutral and impartial, even when the children argued. Viki’s least favourite time of the day, bedtime, soon became her best. Dog-Knows sang her to sleep every night as she cuddled him, the glow of his eyes turning a deep green and then fading to a soft glow.
Several days later, Viki’s parents had decided to take a few days off, and take her and Kris to the coast for the weekend. Viki’s Dog-Knows and Wolfie both went of course. Kris had begun to treat Wolfie like any of his other toys, keeping it close by but often ignoring it for hours at a time. Viki played with Dog-Knows as if he were a friend, anything she did, they did together. Apart from the time she was in class, Dog-Knows was there, sitting next to her while she read or watched her favourite programmes. For a significant portion of that time, Dog-knows was being held or cuddled by VIki.

He, Viki had decided he was male, was being held up by Viki so he
could look out of the window as they drove along. When he saw something of interest he pointed it out, judging by Viki’s reactions if she was interested or not. A song came on the radio by a group called Ray-ray and the Rainbow Light. She was singing along to it, looking at Dog-Knows, when it suddenly came to her.
“I’ll call you Ray!” she announced.
Dog-Knows replied in his own way, “Ray, diminutive of Raymond, originated in the Middle Ages, probably from Latin. Can mean ‘wise counsel’, and ‘protection’. I approve.”

At that time, Viki called him Ray-ray, or Raymond when he wouldn’t let her read at night. Over the next few years, the two of them settled on Raymond, except when she was trying to sweet-talk him.
The important project her parents were working on continued for the next three years, during which time she developed a strong bond with the toy. Her relationship with Kris also strengthened, but both Kris and Viki grew apart from their parents.

Then everything changed. Almost overnight everything Viki knew was removed, apart from Raymond. One evening her parents sat them down and explained what this important project was. It seemed they had been working on collecting and preserving biological samples and loading them into a spaceship which would be sent off into space to start a new world. Because of their work, they were automatically selected to go, along with their children. Viki’s one and only demand was that Raymond was going with her, if he didn’t go, neither did she.

There was some discussion among the selection committee whether this was possible, and if it was, would the toy still work after all that time in space. Battery technology had been developing in leaps and bounds for several decades, but none of the battery manufacturers could guarantee their products for such a long time. The people who made the Dog-Knows range were also unable to say how long the electronics inside the toy would last with a constant power flow, or if it would wake up if it was shut down.

In the end, her parents called in a few favours from the colony ship’s own scientists, and one night while Viki was asleep, Raymond was given an upgrade. His battery and electronics were all replaced, leaving his memory intact but adding some extra functions not recommended by the original manufacturer. They still couldn’t guarantee his continuing function, but this gave him his best chance. He would either work fine, or be just an ordinary soft toy when Viki awoke from hibernation sleep. Her parents decided not to tell any of this to Viki.
Newer Post Older Post Home